A leading business class hotel in Malaysia, the Eastin Hotel Penang has won the best award in the National Excellence OSH Award 2012 (Hotels and Restaurants category) held at the Putrajaya International Convention Centre (PICC). Organized by the National Council of Occupational Safety and Health (NCOSH), this award is presented to recognize organizations’ excellence in work related health and safety performance.

(Excerpt of a speech by Mary Ann Harris, Chairman of  Malaysian Association of Hotels (Penang Chapter)
The Malaysian Association of Hotels, especially the Penang Chapter, is proud that so many of our chefs have been recognized through job offers overseas, as well as by the fact that Penang food is recognized across the globe.
Without you, dear chefs, we hotels could not begin to serve our guests with fabulous food that make them keep coming back for more.
So, to all the youngsters who are training to become chefs, we encourage you to grow in this noble profession, so that we will have more chefs to fill the vacancies with the many new F&B outlets & hotels constantly opening.
Lastly, for all the fame and good publicity that chefs have brought to Penang, we, the hoteliers, thank and salute you.
Well done and keep it up for another 25 years so we may celebrate your golden jubilee!

Since 1993, Feringgi Grill has been nominated by the readers of Malaysia Tatler as one of Malaysia’s Best Restaurants for its exceptional cuisine and service. If you have not dined in the Feringgi Grill lately, do make you way there and be pampered by Chef de Cuisine, Matthias Tretbar and his team for a memorable dining experience. Receiving the latest recognition from Malaysia Tatler’s Advertising Manager, Sue Loke, is Director of Food & Beverage, Alex Phuah. Looking on (from left) is Advertising Executive, Karen Yeoh, Junior Chef de Cuisine, Yeoh Chee Teong and Feringgi Grill & Bar Service Manager, Mohamad Farouk.

Golden Sands Resort, Penang recently received two awards for family-oriented hotels. The hotel was voted the “Most Family-Friendly Hotel” in the 2012 HotelClub Malaysian Hotel Awards and named the winner of the “Best Family Stay” category for the Expatriate Lifestyle Best of Malaysia 2012 Awards.

The MAH Penang Team getting ready to set off on the MAH Treasure Hunt in Kuantan Pahang, with: Front Row (From Left):

Back Row (From Left): The MAH Penang Team all excited to begin their journey on the MAH Treasure Hunt, from left to right:

The association would not have reached RM33,325 if it is not for the help of 14 bands that volunteered to perform live, the sponsor partners who supported the event in kind and the generous contribution from the public. The 14 bands that volunteered to perform live were Kenny Hogan, The Soliano’s, 9 Lives, The Rozells, Diane Soliano and Darrin Rozells, Xyper, Sizzling Sensation, Sound of Lights, The Sparkle Duo, JYJ, The Flaming Signature, Wake Your Mama, After School Project and Volatile. The sponsor partners were SKS Hotel Furniture and Equipment Sdn Bhd, Guinness Anchor Berhad (Tiger Beer), Carlsberg Marketing, FDP Marketing SB, Permanis Sandilands, Everfresh Juice Enterprise, Waja Omega Sdn Bhd and Rentokil Initial Sdn Bhd. 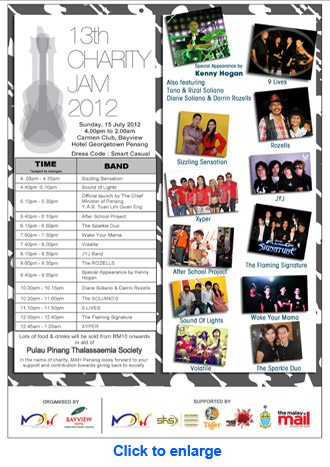 The 13th MAH Charity Jam Session organized by the Malaysian Association of Hotels Penang Chapter took place on Sunday, 15th July 2012, from 4.00pm – 2.00am at Carmen Club, Bayview Hotel Georgetown Penang. This year, The Pulau Pinang Thalassaemia Society is the selected beneficiary of MAH Charity Jam 2012 as MAH constantly seeks to support charities with little or no support, as part of its corporate social responsibility programme. MAH Penang Chapter hopes to raise more than RM30,000 during this meaningful event.

This year’s charity jam saw a list of live performances of 14 bands that have agreed do to their bit of charity. MAH Penang is also honoured with the special appearance by Mr. Kenny Hogan, Singapore’s Drumming Ambassador alongside an array of bands consisting of The Soliano’s & 9 Lives from Langkawi, The Rozells, a prominent local Country and Western Duo, Diane Soliano & Darrin Rozells, Xyper Band from Bayview Hotel Georgetown, Sizzling Sensation from Eastin Hotel, Sound of Lights from Shangri La’s Rasa Sayang Resort, The Sparkle Duo from Hydro Hotel, home grown bands like JYJ Band, The Flaming Signature, Wake Your Mama, After School Project and Volatile. 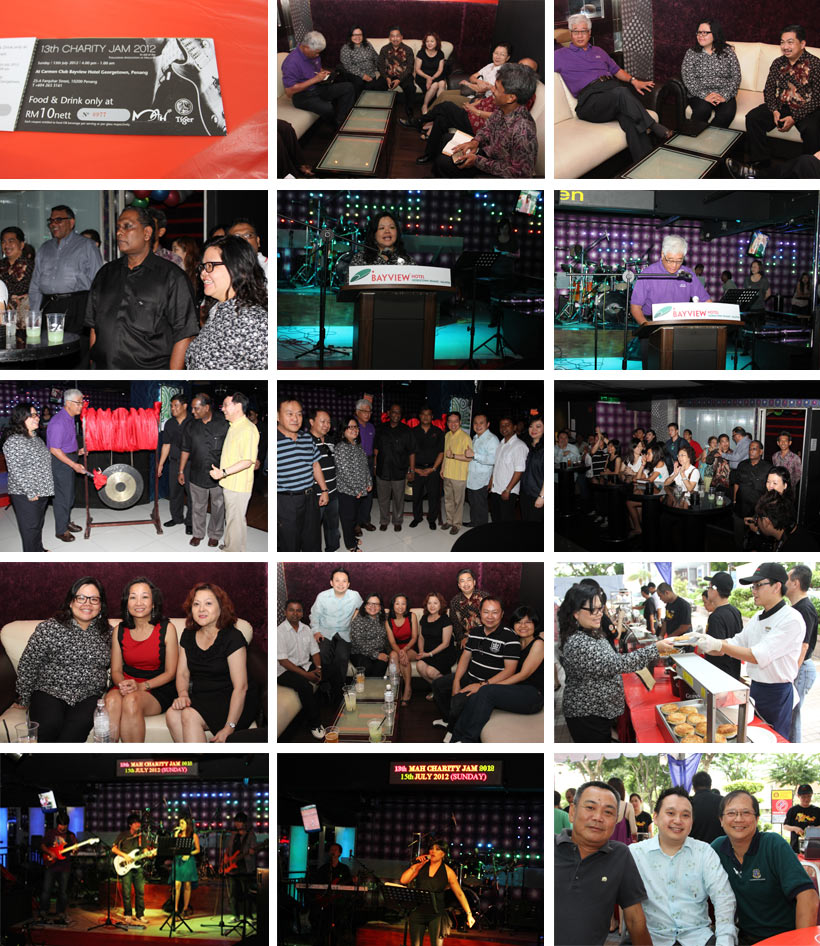 The event was held in a convivial atmosphere for the General Managers of the Penang hospitality fraternity, complete with a “bon voyage” cake and singing food and beverage personnel to wish their counterparts well on their next job posting. 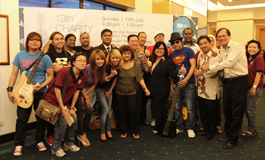 The MAH Charity Jam is a marathon of jam sessions by musical bands to raise funds for charity which has been held for the past 12 years in Kuala Lumpur. The MAH Penang Chapter was bestowed the honours to host the 13 MAH Charity Jam since Penang is still a popular tourist destination and one of Malaysia’s two heritage cities.? Mr Edwin Yap, Area General Manager of Bayview Penang has graciously supported this event by sponsoring the venue Carmen Club and the hotels’ resources to host this charity jam.? MAH Penang Chapter hopes to raise RM30,000 for the sales of food & drink coupons at Carmen Club, Bayview Hotel Georgetown, Penang on 15 July with a 9 hours marathon jam from 4:00pm to 1:00am

The Penang State Government will once again support this initiative by MAH in Penang and Penang Chief Minister, YAB Tuan Lim Guan Eng is expected to grace the event with his esteemed presence.

This year’s charity jam will see over 15 bands performing at Carmen Club. MAH Penang is also honoured that Mr. Kenny Hogan, Singapore’s Drumming Ambassador will make a special appearance during the 13th MAH Charity Jam alongside an array of bands consisting of?The Soliano’s & 9 Lives from Langkawi, The Rozells, a prominent local Country and Western Duo, Xyper Band from Bayview Hotel Georgetown, Sizzling Sensation from Eastin Hotel, Sound of Lights from Shangri La’s Rasa Sayang Resort, The Sparkle Duo from Hydro Hotel, home grown bands like JYJ Band, Somebody Who, The Flaming Signature, Wake Your Mama, After School Project and Volatile. Mr Kenny Hogan will also conduct a free drum clinic for aspiring drummers at Carmen Club on Saturday, 14 July 2012 from 3.00pm to 5.00pm.

This year, The Pulau Pinang Thalassaemia Society is the selected beneficiary of MAH Charity Jam 2012 as MAH constantly seeks to support charities with little or no support, as part of its corporate social responsibility programme.

MAH looks forward to contribute significantly to this cause and provide moral support to this group and their families. Malaysians from all walks of life are invited to lend support and contribute to this good cause, while enjoying good company, great music and an unlimited flow of food and drinks provided by Bayview Hotel Georgetown Penang.? Coupons worth RM100 per booklet can be obtained at the Reception of Bayview Hotel Georgetown before the event or during the event at the entrance of Carmen Club.? The coupons can be used to purchase food and drinks from RM10.00 and above. The Penang State EXCO for Tourism Development and Culture Office has taking the lead to organise a Penang International Travel Mart (Penang ITM) at Equatorial Hotel on the 4th & 5th July 2012. The Penang ITM is a unique opportunity especially for the local travel trade to meet, network, and to showcase their products to the International market. Not only does it provide an engaging platform for business-to-business exchanges, it also allows visitors the opportunity to personally experience what Penang has to offer. This year, “Culture, Food and Heritage” has been chosen as the theme as it truly captures the essence of Penang and has always been the main factor that has drawn travellers from all over the world. 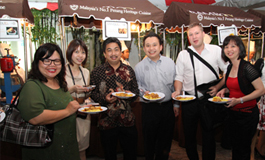 Award Presentation to the Malaysian Association of Hotels (MAH)

Employee Of The Year 2012: Penang Chapter The winner of the MAH Best Employee Award 2012 is Mr. Lim Jiunn Ming of Cititel Hotel, followed by 1st runner up, Ms. Norzaili Binti Mohamad Nor of Golden Sands Resort and the 2nd runner – up, Mr. Kalimuthu a/l Muthurian of Eastern and Oriental Hotel. The champion will represent Penang to join the twelve chapters at the National Level Best Employee Awards 2012 in Kuala Lumpur which will be held in June 2012.

“Congratulations to all the winners for their outstanding contribution and performance. Penang is known for its warm hospitality and the MAH Employee of the Year award is an encouragement for all hotel staff to continue the tradition of service excellence.” said Ms. Mary Ann Harris, Chairman of the Malaysian Association Hotels: Penang Chapter.

The nominees were judged based on their product knowledge, personality, grooming, pro-activeness, teamwork, language proficiency and ability to manage numerous responsibilities at the workplace.